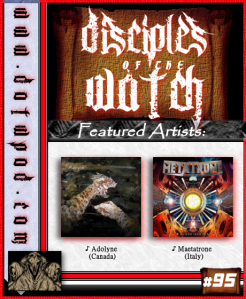 In this episode we’ll discuss some current events, well hear what band Nate’s been enjoying lately in the segment ‘What’s Nate Been Listening To?’, we’ll enjoy some independent music from Adolyne and Metatrone and we’ll wrap the show with one of Gene’s “Guilty Pleasures!”

NMAYNARD JAMES KEENAN Has Finished Writing ‘Words And Melodies’ To All But One New TOOL Song
http://www.blabbermouth.net/news/maynard-james-keenan-has-finished-writing-words-and-melodies-to-all-but-one-new-tool-song/

The Heavy Metal Solution to Conflict in the Middle East
https://www.haaretz.com/israel-news/culture/.premium-the-heavy-metal-solution-to-conflict-in-the-middle-east-1.5792825 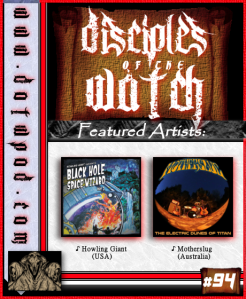 In this episode we’ll discuss current events, well hear what band Nate’s been enjoying lately in the segment ‘What’s Nate Been Listening To?’, we’ll enjoy some independent music from Howling Giant and Motherslug, and we’ll wrap the show with a new segment called ‘First Listen’ where we’ll listen to a new track from an upcoming album for the first time together with you all!

——————————————————-
What’s Nate been listening to?
——————————————————-
Artist: Mork
Mork was created by Thomas Eriksen in 2004 & was primarily a side-project for Eriksen from inception until the debut album release in 2013, & since then the band has rightly earned their accolade as one of the top Norwegian black metal acts of recent years, receiving strong endorsements from their peers.
“I remember when making Mork’s debut album, I originally got the inspiration from visiting Darkthrone’s studio, & the following year I get the honour of being picked out as Fenriz’s “BAND of the WEEK”, as well as having Nocturno Culto supplying vocals to my second album. Obviously Darkthrone has been an important influence, & the fact that Peaceville Records decided to work with Mork and to release the third album, is nothing short of a huge honour and a pillar on my bucket-list. To go from making an album just for fun and being picked up by independent underground labels to then signing with Peaceville is an absolute dream come true”
Album: Eremittens Dal
Song: Hedningens spisse brodder
Buy now on Amazon:
MP3
CD
Vinyl

5.Former JUDAS PRIEST Guitarist K.K. DOWNING: Some Of The Details In My Autobiography Will Surprise You
http://www.blabbermouth.net/news/former-judas-priest-guitarist-k-k-downing-some-of-the-details-in-my-autobiography-will-surprise-you/

“Delinquent”, a brand new song from PHILIP H. ANSELMO & THE ILLEGALS, the project led by the former PANTERA and current DOWN/SUPERJOINT frontman, can be streamed below. The track is taken from PHILIP H. ANSELMO & THE ILLEGALS’ sophomore album, “Choosing Mental Illness As A Virtue”, which will be released on January 26 via Anselmo’s Housecore Records in the U.S. and Season Of Mist in other parts of the world. The disc is the follow-up to PHILIP H. ANSELMO & THE ILLEGALS’ debut, “Walk Through Exits Only”, which came out in 2013 to mostly positive reviews.
The lineup of the THE ILLEGALS has changed on several position since album one. This is what Philip has to say about his new crew: “Their creative input is fucking fantastic. This is something that was very different from the first record where I was very staunch. I wanted it to be ugly. I was very firm that I was writing every fucking note. The thought was, ‘This is my contribution to ugly music right this second in a heavy metal vein.’ That was great at the time. ‘Walk Through Exits Only’ made its own little statement that I am a free agent and I belong to no single band. This time, I worked closely with everyone. We tried different ideas together. It made the spirit of this thing come alive even more because of the enthusiasm these guys bring. It enhanced the integrity of the project.”

A show about Hard Rock and Heavy Metal music and news, both Independent and the 'Big Time' bands!