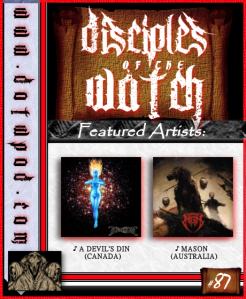 In this episode we’ll discuss current events, what’s Nate been listening to, independent music from A Devil’s Din and Mason, and we’ll wrap the show discussing Loudwire’s “10 Greatest Death Riffs.”

——————————————————-
What’s Nate been listening to?
——————————————————-
Artist: Celtic Frost
Notes: Released in 1987. The album is more varied than many of Celtic Frost’s past LPs, with unlikely covers (Wall of Voodoo’s “Mexican Radio”), emotionally charged love songs, the album’s recurring industrial-influenced rhythmic songs of demons and destruction, traditional Frost styled songs about dreams and fear, and a dark, classical piece with female vocals.

The album is vastly different from the band’s previous work and cemented its late 80s avant-garde metal term; it is also a departure from the extreme style found on the band’s previous albums, Morbid Tales and To Mega Therion that Celtic Frost had become known for. However, it does have the recurring symphonic elements found on previous albums. The album has a more classic heavy metal style within the songs with elements of industrial, classical and gothic rock, and even has an industrial/electronic body music (EBM)-inspired rhythm in “One in Their Pride”. It does have a few black metal elements remaining in Warrior’s vocals, though, and some thrash-influenced guitar riffs.

These albums were some of the pivotal LPs for underground metal and introduced a new and more varied sound. Celtic Frost, along with Venom and Bathory were pioneers in the still underground black metal scene, although Celtic Frost were much more experimental with the addition of classical instruments, operatic female vocals and sampling. Celtic Frost was often labeled by critics as avant-garde metal.
https://en.wikipedia.org/wiki/Celtic_Frost

“Into The Pandemonium was the pinnacle of Celtic Frost’s creativity, up to the release of Monotheist. By that time, through our rather manic work, we had attained finally barely a level of musicianship where we could actually realise all of these things. Martin and I brought into Celtic Frost incredibly diverse influences. He, for example, was deeply immersed in the new wave scene of the time -– Bauhaus, Joy Division and Siouxsie And The Banshees – and I came from new wave, but I also came from a jazz and classical background. I loved the ’70s prog bands like Emmerson, Lake & Palmer, early Roxy Music and so on, and on Into The Pandemoniumwe finally felt comfortable enough as musicians to not just have little hints revealing this influences like we did on the previous albums but to actually go full out and write that kind of music. And of course we overstretched ourselves, we went right past our capabilities, but I’m very glad we did this. One can think of the album whatever one wants, and I know it’s a very controversial album for some, but creatively, it was certainly the pinnacle for Celtic Frost until 20 years later.”
http://teamrock.com/feature/2017-08-16/every-celtic-frost-album-in-tom-g-warriors-words

2.METALLICA Has Begun Work On Reissues Of …And Justice For AllAnd Metallica

I1. PILE OF PRIESTS

I2. DAYS OF THE DEAD

To get your FREE download, please visit the following link: https://daysofthedeadreddeer.bandcamp.com/album/the-moshing-dead-vol-1

I5. CORNERS OF SANCTUARY

In this episode we discuss current events, what’s Nate been listening to, independent music from DEATH IS THE NAVIGATOR from Southampton in the UK and SOULSTORM out of Canada, and we’ll wrap the show some tidbits from the music-related podcast community in the Podcast Roundup!

4. METALLICA To Reissue ‘Kill ‘Em All’ And ‘Ride The Lightning’ Albums In April
http://www.blabbermouth.net/news/metallica-to-reissue-kill-em-all-and-ride-the-lightning-albums-in-april/

SONG INTERMISSION (Featured Independent1):
Artist: Death is the Navigator (Southampton, UK)
from the Album: Heliognosis
the Song is: Once More
http://deathisthenavigator.com

Filmmakers interested in having their work shown at Black Mourning Light 2016 can use the following Filmmaker’s Application:  https://blackmourninglight.wordpress.com/apply-to-play-bml-2016/apply-as-a-filmmaker/

Bands interested in playing at Black Mourning Light 2016 can apply at the following link below with submissions ending on July 1st and 2016 lineup revealed in August: https://blackmourninglight.wordpress.com/apply-to-play-bml-2016/

6. There is still time to get your submissions in for the Ellefson Music Porudction’s UNDERGROUND SAMPLER! 20 unsigned artists will be chosen to be on a sampler released internationally, and inside EVERY EMP Label Group release!
Submission is easy. Upload your track to Soundcloud or Reverbnation, and submit it via email to emplabelgroup@gmail.com with the subject EMP UNDERGROUND!

In addition to holding the competition, BRUTAL BATTLE CUBA is raising funds for instruments to give to Cuban musicians. Full details can found at the following indiegogo link: https://www.indiegogo.com/projects/brutal-battle-cuba-2016–2#/

If you have any news you’d like to share regarding your band please email us at news@dotwpod.com

A show about Hard Rock and Heavy Metal music and news, both Independent and the 'Big Time' bands!